1. What are the company’s core businesses?

KTC core businesses consist of credit card business and personal loan business. In 2019, each business’s total receivables are shown in the chart below. 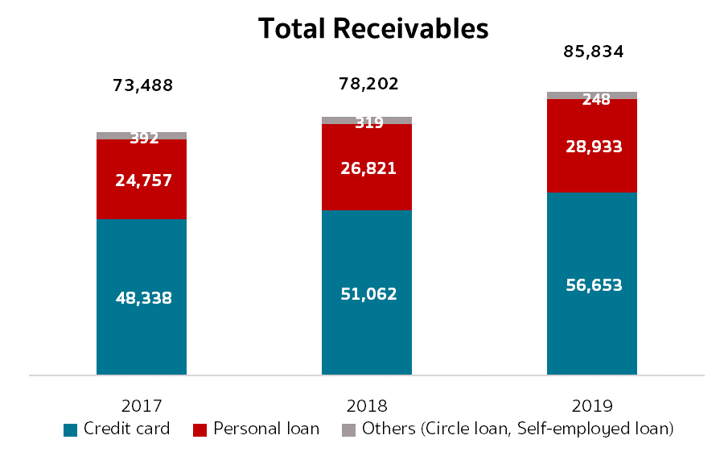 2. What are the company’s major sources of income?

There are two types of main incomes: interest income and fee income from both businesses. The remainder derives from other businesses’ revenues, including Circle loan and Self-employed loan, details shown in the chart below. 4. What is the sources of funding? 5. Debt covenants of the company

The company’s debt covenant has limited to Debt to Equity ratio lower than 10 times. In 2019, the ratio is only at 3.33 times.

The company is proactive in all steps of the process. With Screening that starts at card initiation, proven collection process, and management that monitor collection closely. However, the impacts from applying the Thai Financial Report Standard 9 (TFRS9) are anticipated to be on numerical financial reporting rather than on actual business operations.

8. The tendency of portfolio quality

Asset quality continues to improve. NPLs of both credit card and personal loan has been constantly decreased since year 2013; as a result, the total portfolio’s NPL dropped. NPL in 2019 are as follows The Shareholders’ meeting no. 1/2003 on March 25, 2003 approved the dividend payment policy to pay approximately 40 percent of net profit after deduction of income tax and appropriation for a legal reserve.

KTC has outlined targets for its separate financial statements (businesses include credit card, personal loan, and car title loan under personal loan license) with its credit card spending growth around 15% and its total receivable portfolio expansion of 10% approximately. NPL is expected to be strictly monitored, yet likely to be slightly higher than last year. The Company’s net profit is also aimed at no less than previous levels.

- The Bank of Thailand has set the minimum assistance measurement for both credit card and personal loan debtors who are not considered Non - Performing Loan (NPL) to ease their financial burden amid the pandemic of the COVID-19, effective since April 1, 2020.

Impacts from applying the new accounting standard TFRS9 are anticipated to be on numerical financial reporting rather than on actual business operations. The most impact is from the standards for bad debts write offs which is more strictly than the previous ones. In TFRS9 standards, the Company is able to write off bad debts only when it can no longer reasonably anticipate that those debt could be collected

The differences in the Company’s new financial reporting according to TFRS9 standards can be explained as followings.

1. Bad debts written off for tax benefits will not be removed from the report until proven that such debts could no longer be repaid. Hence, new NPL under TFRS9 is comparable to Write offs + NPL under old standard. For example, Company A is used to write off bad debts at 7-8% yearly and left with NPL around 1%. Under TFRS9, new base of NPL would be around 8-9%.

2. According to the new standards, the Company will still acknowledge interest income from NPL until such NPL is written off, and even it is already in Stage 3.

3. The new standards require the Company to set up provisions for NPL (both principle and interest) according to the calculation following ECL Model (Expected Credit Loss Model) which is not 100% provisions set up as before.

4. In case that there is difference between interest income and provisions set up for interest, the new standards require the Company to recognize such difference in income statement.

5. Owing to new reporting of NPL, relevant ratios such as allowance for doubtful accounts to total receivables (Allowance/Port), allowance for doubtful accounts to receivables with over 90 days past due (NPL Coverage), will also be affected. With changes in many parts of the new standards and with the impact of ECL Model, portfolio characteristics and various impacts to portfolio would affect different ways in provisions set up. Therefore, the new estimates to use as a base to calculate aforementioned ratios would be somewhat difficult. Regardless, based on current facts, the Company believes that under the new standards, the ratio of Allowance to Portfolio according to the new base would be roughly 9%-11% and NPL Coverage would be around 100-200%. Once TFRS9 is fully adopted, such ratios are expected to be more precisely estimated.

-The calculation of KTC Allowance

Many factors affect the calculation of the allowance for doubtful accounts such as the change of the portfolio, portfolio quality, and the provision rate. Allowance are calculated by the following formula : The new businesses are being developed to be a strong foundation for KTC in the future. Hence, these new business operations are being carefully planned and tested at a steady pace. Currently, it is too early to set targets for the new business. The testing is expected to consume a period of time and will be initially focused on small groups of customers so that the company could adjust its strategies in accordance with its long-term growth plan.

- Effect of the upcoming DSR measures from the bank of Thailand

Internet Explorer browser does not support www.ktc.co.th service.
To continue with this browser, some menus/features may not work properly.